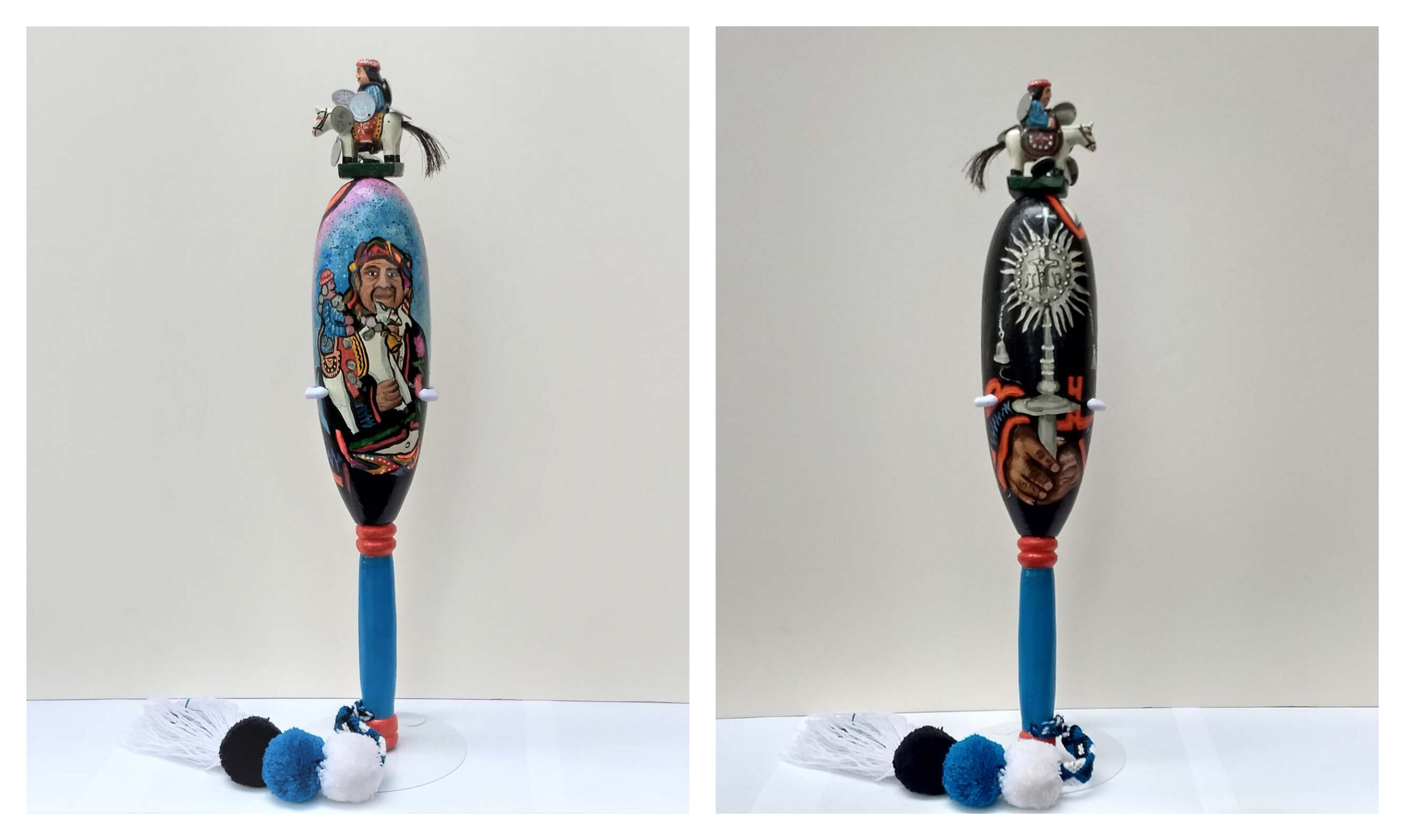 La vara is a ceremonial staff that serves as a symbol of the power of the ancestral authorities. Each year the staff is transferred to the new authorities named by the cofradías (Catholic religious brotherhoods). This staff from the town of Chichicastenango is topped by a painted gourd and a small wooden sculpture known as the Tzijolaj. The Tzijolaj is a mythical figure transmitted by the Maya ancestors, but in an example of religious hybridization, is depicted as Saint James the Greater mounted on a horse (Santiago de los Caballeros).

La vara, or ceremonial staff, represents the power of the ancestral authorities. Today, the vara is used within the cofradías, the Catholic religious brotherhoods of Maya towns. The vara is transferred each year to the new authorities named by the cofradías or indigenous mayoralties. The cofradías or mayoralties use the vara in the course of resolving disputes over land or property where boundaries or borders are affected by others, in order to assure the wellbeing of the collective:  the community or members (cofrades) that they represent.  In daily life the vara is also used as a symbolic instrument for mediation.

The form of the vara may differ in each Maya town or community.  This depends principally upon the cofradías involved.  Thus, for example, the crown of the vara may represent a particular saint or an aspect of the Virgin Mary, but the essence and authority of the ceremonial staff remain the same.

In the present example of the vara used in the town of Chichicastenango, the staff is topped by a painted gourd, plus a small wooden sculpture known as the Tzijolaj.

The Tzijolaj is a mythical figure transmitted by the ancestors, which reveals the culture and religious hybridization.  In the oral tradition of the K’iche’ Maya towns Santo Tomás Chichicastenango and Santo Tomás Chiché, this figure is called Teko Se’n, Teko Mo’s, relating to Maya mythology.  Other towns know him as The Lord of the Dust—originally a military figure bearing gunpowder for his pistols:  thus, the one who ignites the gunpowder.  The k’iche’ab’ (K’iche’ Maya people) of Chichicastenango and Chiché converted this figure into the cofrade, or member of the brotherhood, who lights the fireworks: a sacred task.  Today the cofradías dance with the Tzijolaj figure, showing the way and getting rid of all the ills and problems, so that the people may have a happy life.

The form of the Tzijolaj also represents a Spanish saint—Santiago de los Caballeros (Saint James the Greater) mounted on a horse.  According to legend, during the 17th century, England and Spain were at war and Santiago de los Caballeros stopped them.  He intervened and told the two countries, “Why are you fighting over land?  You should rest and celebrate the fact that you both already have land.”  He convinced them to stop fighting, and the two nations shared a feast instead. The story was brought to Guatemala by the conquistadors, and this piece of Spanish culture was adopted into the traditions of the cofradías in order to end wars and conflicts between Maya towns, or between families.

Today in Chichicastenango, on the feast day of the patron Saint Thomas the Apostle, the cofradía ties a rope from the church bell tower to the flying pole (el palo volador).  From this rope they hang a sculpture of the Tzijolaj in the form of Santiago de los Caballeros, to announce that the town’s festivities have begun.