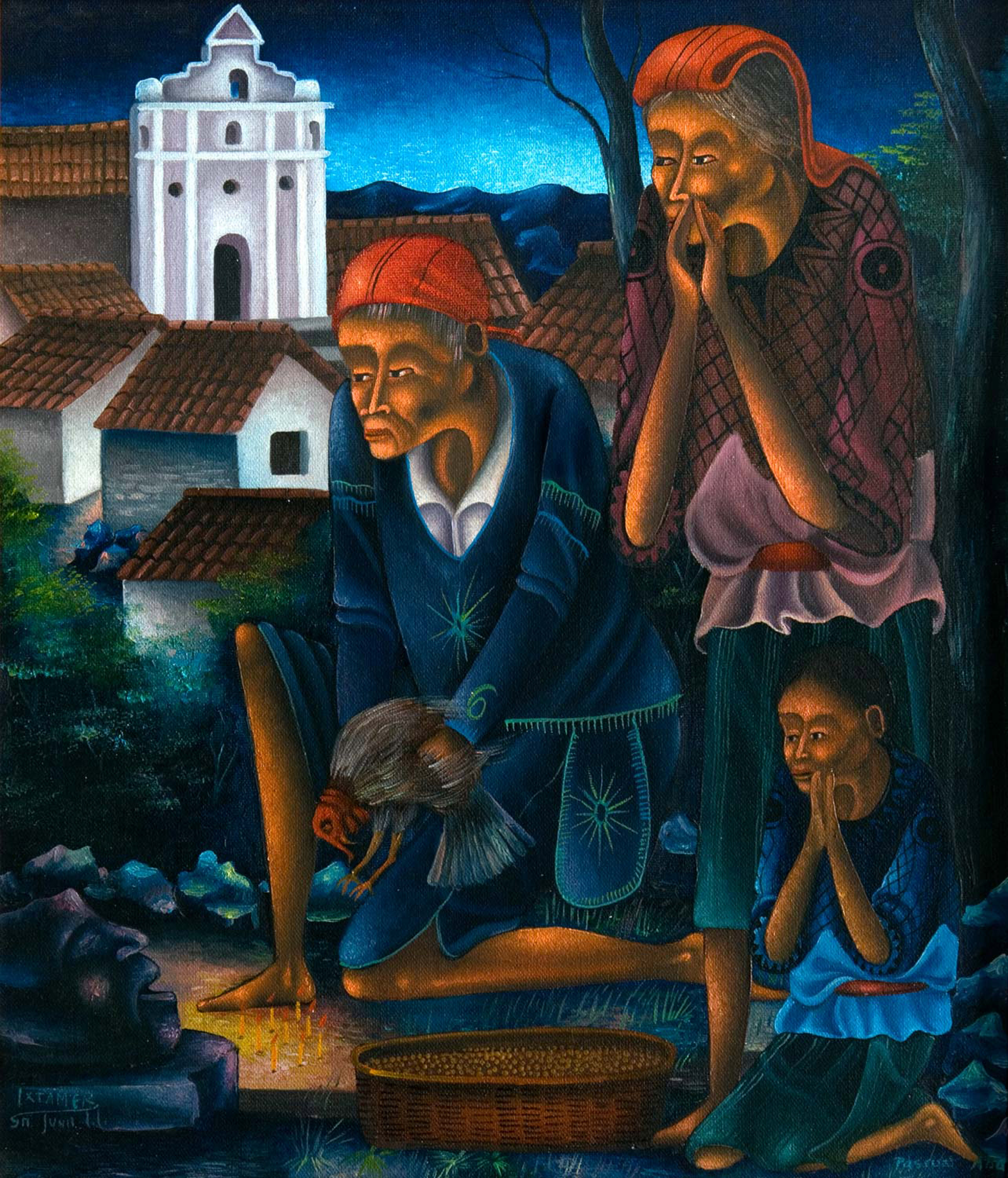 There are literally hundreds of sacred sites where Maya practice their rituals. Many are outside of the towns in the forested hills, often where there are prominent rocks, water sources, or groves of trees. These people are at Pascual Abaj, one of the most sacred of these sites outside the town of Chichicastenango. The brilliantly lit Catholic church at the center of town contrasts with the ritual secretly performed at night in the forest. Despite more than 500 years of dominance by the Catholic Church, the Maya continue to practice important aspects of their religious traditions.

Pascual Abaj depicts a family performing a traditional Maya ritual at a pre-Hispanic sacred site. Many artists have painted the rituals performed at Pascual Abaj because it is the most well-known of the pre-Hispanic Maya ritual sites still in use. This version stands out among them because, on a deeper level, this painting represents the relation of the Maya to the Spanish culture and Catholic religion during the more than five hundred years since the Invasion.

Hidden by darkness of the very early morning, the family has come to a forested area on a hill outside of the town of Chichicastenango to perform a ritual asking for some favor—a good harvest, health of a family member, or perhaps success in some endeavor they are about to embark upon. They have brought a chicken to sacrifice and have lit candles. They also have brought a basket of grain, probably corn. Perhaps this is the corn for the new planting, which they want blessed, or an offering to the spirit of the rock. The darkness of the forest is broken by the pure white facade of the Catholic church, which looms in the background over this small gathering.

It is an interesting contrast, the brilliantly lit Catholic church at the center of town and the secret Maya ritual performed at night in the nearby forest. This stark contrast can be seen representing the Catholic Church in relation to the Maya. Catholic dominance was not able to eradicate Maya culture, which continued to be practice in secret over the centuries. The Maya today still practice their pre-Hispanic customs and teach their history and mythology. Acts such as performing an ancient Maya ritual demonstrate what Robert Carlsen calls the “passive resistance to the occupying culture.” By passively resisting, the Maya have managed to preserve important aspects of their culture and religious beliefs.